The final outcome of the European Energy Union is to promote competitiveness, solidarity, and security among its members. 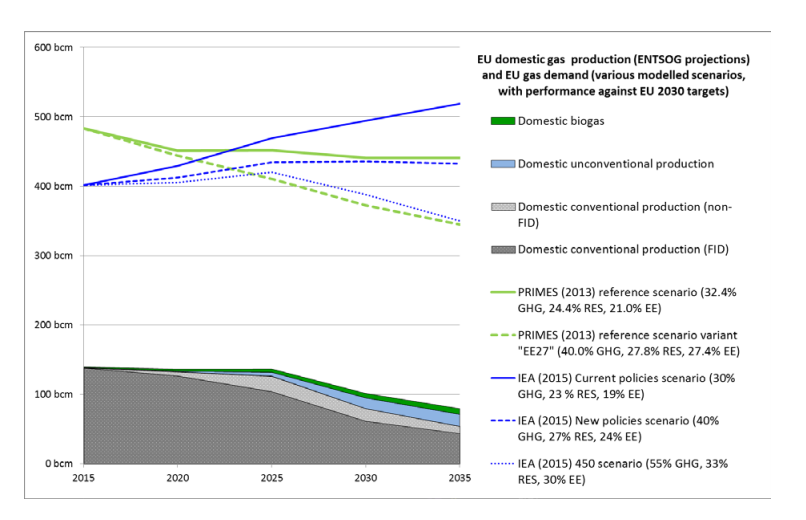 Based on the above graph it is obvious that the future European gas market trends are:

One of the key elements of European gas security is the level of imported gas from Norway. Norway is a reliable source for gas the last decades for Europe and its geographic location and strategic huge gas reserves make that possible. In 2013 according to Cedigaz (the international association of natural gas) Norway has exported 107 billion cubic meters of natural gas to Europe which represent the 21% of total European gas demand for this year. 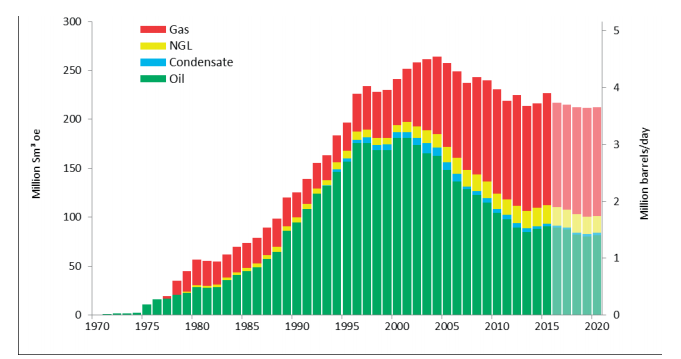 Based on the above graph Norway gas production will be stable until 2020 but from 2020 and beyond many experts claim that the production will decline significantly, so Europe will have to cover this gap in imported gas from Norway from other sources such as LNG imports or to increase underground gas storage capacity. Finally, to mention that it is possible that Norway to find new gas fields and the whole situation to change significantly. For instance, after the new discovery of Zohr giant gas field in Egypt, this country increased its proven gas reserves by 30% only with one field. Zohr gas field is estimated to possess 30 trillion cubic feet of gas proven reserves (roughly to 800 – 900 billion cubic meters of gas).

Also, the same report from CEER mentions that the LNG terminal utilization in Europe is very low and it’s in decline from the 53% on 2010 to 19% on 2014.  The main factors which have forced this trend are: 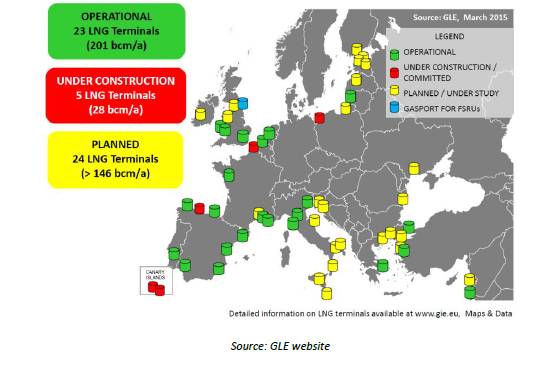 It is obvious, from the above graph that the majority of LNG import terminals are in the Western Europe, so South – East European countries have no access to LNG import gas quantities. The future goal of the EU is to promote the construction of more LNG terminals in South East Europe (Italy, Greece, and Western Balkans) and in Baltic countries. The main factors which will affect the future European LNG demand are:

Europe can benefit from the recent low LNG prices which will remain low for the upcoming years and especially until 2020. European gas companies can import cheap LNG to increase their gas storage, to increase gas liquidity to the whole European gas market and to promote gas as a transport fuel. 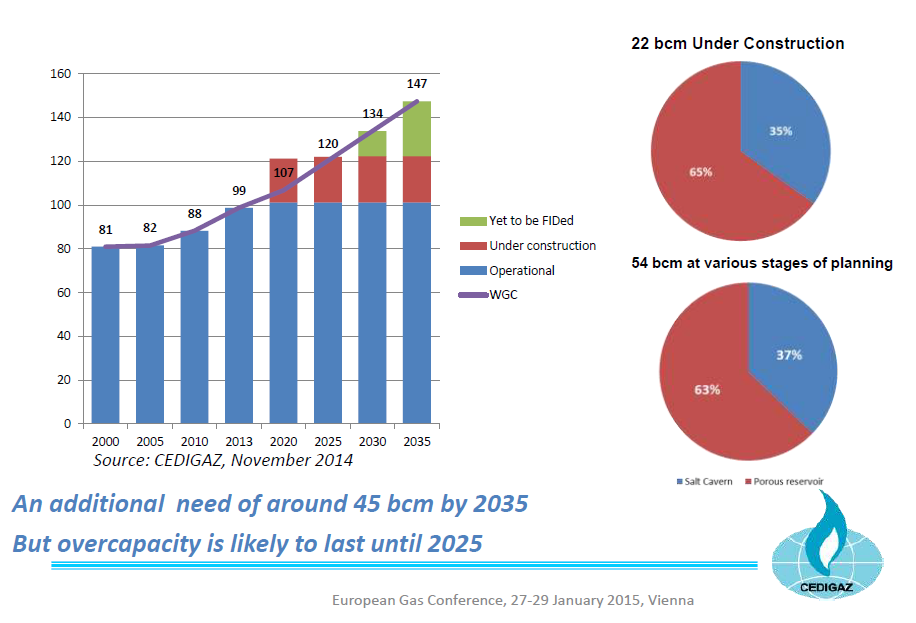 European UGS will play a vital role in the future European plans regarding the security of supply for gas. The environmental constraints on coal, the supply and demand equation and the European gas market liberalization will drive the new era of growth for underground gas storage facilities in Europe for the next two decades.

Diversification of gas sources, a new strategy from Europe

Europe the last 10 years has increased its efforts to diversify its gas sources. The most promising new gas sources for Europe in the short and medium – term future are:

The International Energy Agency estimates that most of the US LNG export terminals will be online until 2020, which will make the United States the world’s third-largest LNG exporter, behind Australia and Qatar. Can the US LNG exports can compete with Russian gas prices over Europe?

It is obvious from the above graph that USA LNG exports can be very competitive even with LNG prices at 5$/MMBtu. Also, many experts claim that a gas price war between USA gas companies and Gazprom over Europe gas market is inevitable in the near future. Gazprom probably will adopt a strategy which will force the company to low gas prices over Europe (one of the lowest cost suppliers to Europe with spare capacity) with the main purpose to protect its market share over European gas market. The balance between political and commercial aspects will determine if USA gas exports will direct to Europe or Asia – Pacific region.

The main factors which can challenge the supply with gas for Europe are:

Athanasios Pitatzis is is an Industrial/Petroleum Engineer and Member of the Greek Energy Forum. He specializes in the development of oil & gas markets in Southeast Europe and the Mediterranean. Also, he is also the owner of the website Energy Routes in which he publishes all of his articles for global oil and gas industry, http://energyroutes.eu/ The opinions expressed in the article are personal and do not reflect the views of the entire forum or the company that employs the author. Follow Greek Energy Forum on Twitter at @GrEnergyForum and Athanasios at @thanospitatzis