First Greek Pulication: 25/01/2018 and republish of the English Version on 14/04/2018 by Foreign Affairs the Hellenic Edition, https://www.foreignaffairs.gr/

Link for the photo profile of this article: http://seanews.co.uk/supporting-innovation-in-lng-carriers/

In recent years, and especially after 2014, the Global Liquefied Natural Gas (LNG) market has evolved and transformed into a “global” and fully integrated market. There is a growing trend of competition between emerging LNG exporting countries such as the USA, Australia, and Russia, for which country will gain the largest market share of the Global LNG Market. Of course, the biggest fact regarding the Global LNG Market is the dominant position held by Qatar as the largest exporter of the Liquefied Natural Gas (LNG). 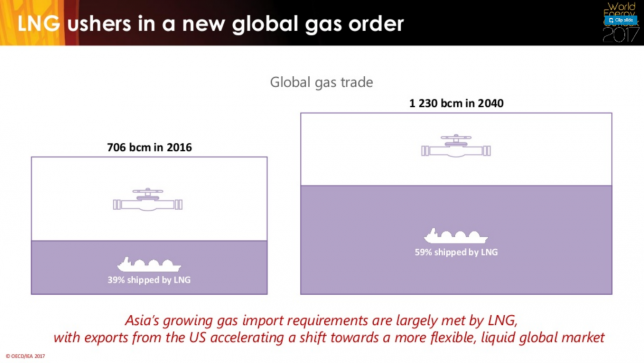 The Global LNG trade will play a vital role in the future energy security of Europe and Southeast Asia. 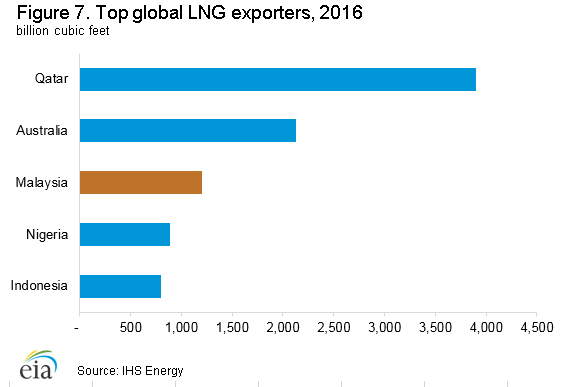 According to the diagram above, the top Global LNG exporters for 2016 were:

A complicated commodity market, which will cause many geopolitical upheavals over the next fifteen years into the global geopolitical energy ecosystem. Some of these upheavals will be: 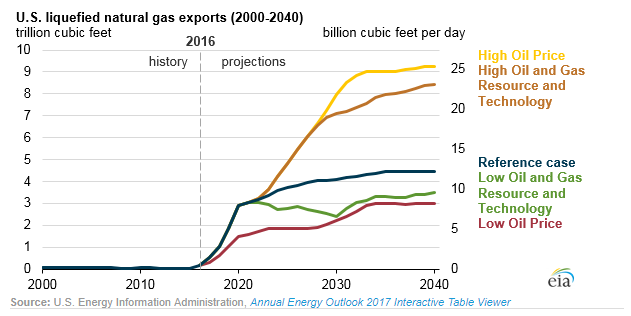 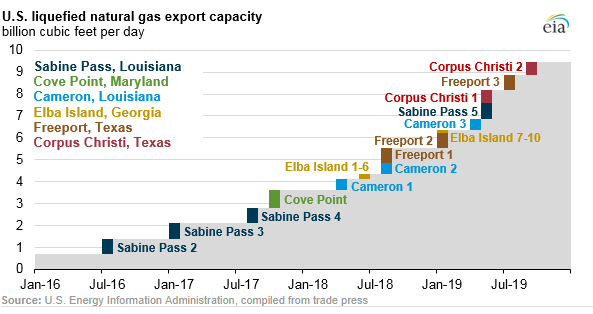 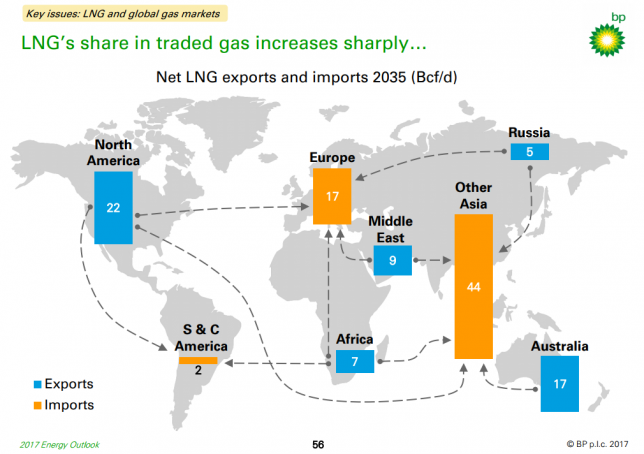 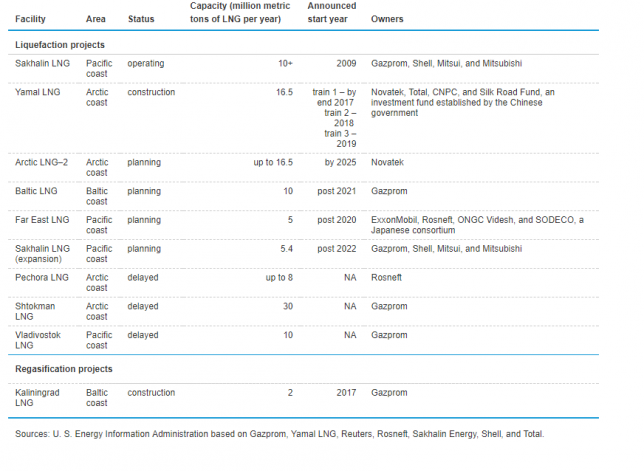 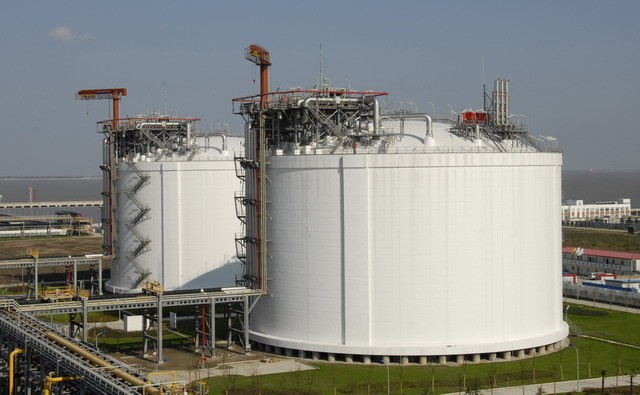 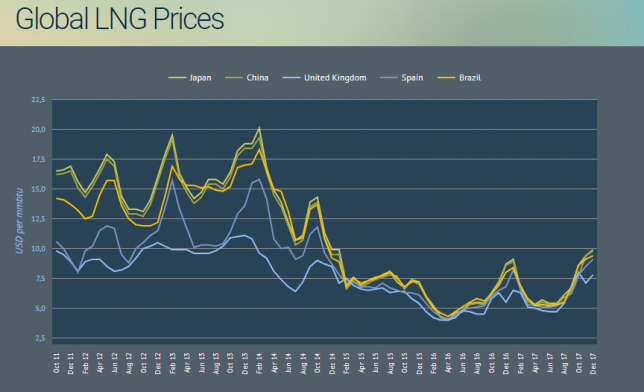 As we can observe from the graph above, Global LNG prices have changed quite a lot in recent years. More specifically, from an average of $ 15-17 / MMBtu in October 2013, it dropped to an average of $ 7-10 / MMBtu in October 2017. Of course, global surveys and studies indicate that the forecast for World Liquefied Natural Gas Prices is optimistic for countries with large gas imports and pessimistic for countries with large gas exports. 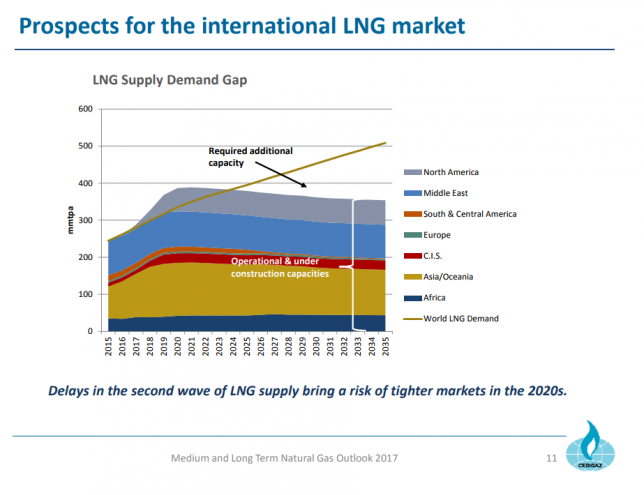 According to CEDIGAZ (the International Association for Natural Gas), oversupply to the global LNG market will last until 2023-2025, resulting in World LNG Prices to drop below  10 $ / MMBtu. At these prices, many LNG Export Terminals are either uncompetitive or have low-profit margins and, in some extreme cases, do not even cover their export costs. Also, CEDIGAZ is predicting that a supply shortage may occur after 2025, with the result that the current LNG Exporters cannot cover the future global demand for LNG, a situation that will trigger global LNG prices above 15 $ / MMBtu,. This situation may benefit future LNG exporters who plan to start exporting after 2025, these LNG exporting countries are: 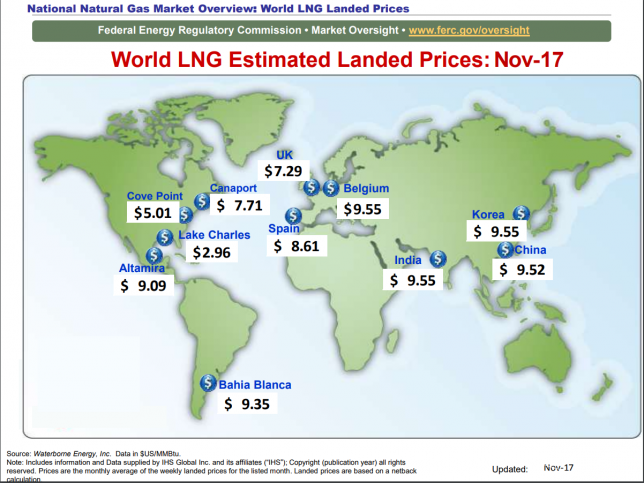 As expected in the winter, LNG prices are rising due to higher gas demand for electricity generation and domestic heating caused by low temperatures. Developed economies that cover a large part of their energy needs with natural gas will pay higher prices than other countries. Such countries are Italy, Germany, South Korea and Japan. Finally, we should mention that the secret for the global LNG Industry is to increase demand by 2030 to balance the supply and demand markets. 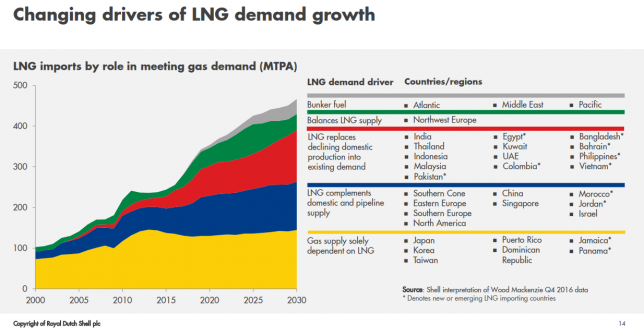 Future global LNG demand will be derived/based on four categories that are:

Finally, we can say that the following factors may affect future global LNG prices but also global LNG demand and supply, these are: 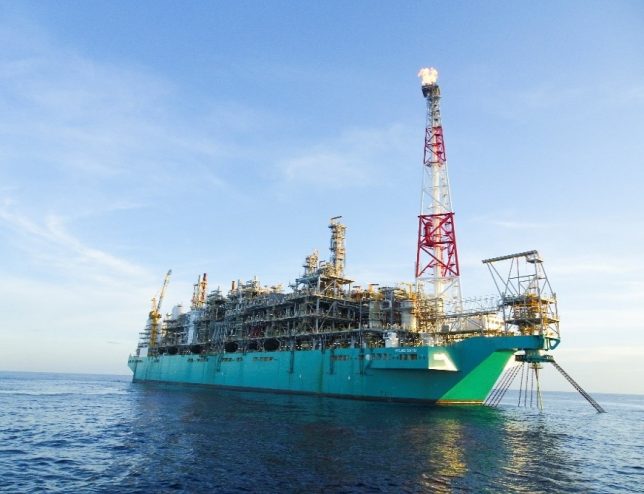 This analysis was a global snapshot/overview of the Global LNG Dynamics and Trends which are changing the last 6 years per quarter. Global Energy Companies which have LNG assets to their portfolio and Global Investors which have invested in LNG Assets need to monitor closely the Global LNG Market in Weekly and Monthly bases.

The Greek Version of this article was published by Foreign Affairs Magazine Hellenic Edition in their website on 25/01/2018, http://www.foreignaffairs.gr/articles/71614/athanasios-pitatzis/o-rolos-toy-lng-stin-eyropaiki-energeiaki-asfaleia?page=show

Athanasios Pitatzis is an Industrial/Petroleum Engineer and Alternate Committee Member of the Greek Energy Forum. He specializes in the development of oil & gas and power markets in the UK and the Southeast Europe and the Mediterranean. Also, he is the owner of the website Energy Routes in which he publishes all of his articles for global energy industry, http://energyroutes.eu/ . He has published more than 50 energy opinion articles in major Greek and English Energy websites (in English: Natural Gas Europe, Europe Energy Review, OilVoice, International Petroleum Students Magazine, Resources Global Network Magazine, About Oil Magazine and Rigzone) Currently, is working as PV Performance and Monitoring Analyst in the UK. (His LinkedIn Profile: https://www.linkedin.com/in/thanospitatzis/ ).The opinions expressed in the article are personal and do not reflect the views of the entire forum or the company that employs the author. Follow Greek Energy Forum on Twitter at @GrEnergyForum and Athanasios at @thanospitatzis.