Recent surveys carried out offshore of the country have reported the presence of good oil and gas reserves, which could attract foreign investments. The volatility of global prices and the future global energy mix, in which alternative energy sources will play a significant role, however, threaten the future of exploration in the area.

Its large offshore oil and gas reserves and its geographical proximity to major consumers make Lebanon an interesting area for foreign investors. However, if the country wishes to capitalize on its potential in the upstream sector, it will need to deal with its high public debt, lack of infrastructure and the inefficiency of its bureaucracy. Further complicating the picture is the region’s instability.

Strengths
Lebanon oil and gas blocks are located near huge oil and gas consumers, Turkey and the European Union. In addition, Lebanon is located close to an Exclusive Economic Zone (EEZ) based in Eastern Mediterranean basin with proven oil and gas reserves (Egypt, Israel, and Cyprus). Existing 2D and 3D seismic surveys conducted by many companies such as: Spectrum, NEOS, and PGS, and they reveal a new area for exploration of oil and gas resources that can attract more upstream companies to invest in this area. Therefore the existing seismic surveys will help Lebanon attract foreign investments in the upstream sector. Based on this data, the regional oil and gas discoveries and the geological history of Lebanon, EEZ, the country’s Petroleum Authority, has suggested that the Lebanese offshore is a gas are to promote. Moreover, Lebanese authorities plan to place the government’s share (Royalty and Profit Oil) in a Sovereign Wealth Fund (SWF), since the government expects a significant amount of oil and gas revenue thanks to the high probable oil and gas reserves estimated by Spectrum and Lebanon Ministry of Energy.
A positive sign for the Lebanese upstream sector was that 46 international companies have been prequalified to take part in the first licensing round during 2013. According to the US Geological Survey (USGS), the Levantine basin has 122 tcf of recoverable gas. 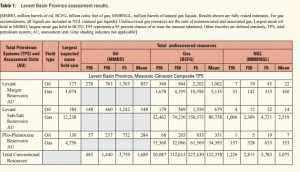 Weaknesses
The high level of government debts (over 130% of the GDP for 2014) and political instability are the 2 main challenges for the future oil and gas exploration in Lebanon. That Lebanese governance has been weak and ineffective in the upstream sector is a known fact since the first Offshore Licensing Round wasn’t successful and lasted for 2-3 years and did not end on the date.
The Syrian civil war and the mixed religion social groups in Lebanon are an explosive geopolitical cocktail that can turn at any time, threatening the current and future oil and gas extraction activities in the country. Additionally, Lebanon has a maritime dispute with Israel regarding their EEZs.
The Lebanese energy mix is heavily dependent on fossil fuels imports and especially on refined petroleum products, which account for over 90% of total primary energy demand in the country. One cannot overlook the high level of corruption in the country. According to the Global Corruption Index 2015, Lebanon is in the 123rd position among 167 countries. The same ranking sees Syria in 154th position, Israel in 32nd place (tied with Cyprus) and Egypt in 88th position.
According to the Global Competitiveness Report 2015–2016, Lebanon’s weaknesses are its inadequate supply of infrastructure, inefficient government bureaucracy, and political instability. Its poor performance and debt, in particular, are the 2 factors that can negatively affect the future of the country’s upstream sector.

Opportunities
The use of potential oil and gas resources will save Lebanon a significant amount of money which the country will be able to  redirect towards either the development of other sectors of the economy or for the payment of the national debts. The country could specifically benefit from the creation of new jobs, an increase in government revenue and energy security. The availability of new resources will also increase Lebanon’s geopolitical weight and its regional cooperation with Cyprus, Syria, Egypt and Turkey.

Moreover, Lebanon can develop a strategic partnership with the European Union as a future market for Lebanese natural gas, along with setting up cooperation with international organizations such as the IMF, the World Bank, the Natural Resources Governance Institute, the United Nations, the European Commission and specialized NGOs.

Threats
First of all, 2 of the key threats for the future exploration in Lebanon are the volatility of global oil and gas prices and the future global energy mix, due to the increasing role of alternative energy sources such as solar and the wind.

Secondly, high level of corruption in the country, as mentioned earlier, can result in the misguided governance of Lebanese oil and gas revenues. Also, conflicts within the country or with Israel as well as the geopolitical instability of the region due to the Syrian civil war, increase the possibility of terrorist attacks on offshore oil and gas installations or LNG onshore terminals. Finally, investments in the education sector and the exploitation of domestic resources are still too low. Education is a critical pillar for the future of Lebanon, in order to create a diversified workforce that can support other economic sectors once the wealth of resources has dried up.

It was first published on About Oil Magazine website on 13th June of 2016, http://www.abo.net/oilportal/topic/view.do?contentId=2635761

One other version of this article can be read in this link https://medium.com/@AboutOil/lebanon-upstream-future-potential-and-challenges-c0d77ef6ff09#.s6gh9tkwb