According to Exxon Mobil Outlook for Energy 2016 report, global demand for natural gas is seen rising by 50 percent from 2014 to 2040, faster than most other fuels and more than twice as fast as oil. In the same report, Exxon Mobil claims that nearly half the growth in global gas demand through 2040 is expected to be met through inter-regional trade, most of it using LNG. Also, Exxon Mobil predicts that by 2040, Asia Pacific is projected to get more than 40 percent of its gas from other regions, and likely will have overtaken Europe as the world’s largest net gas importer. 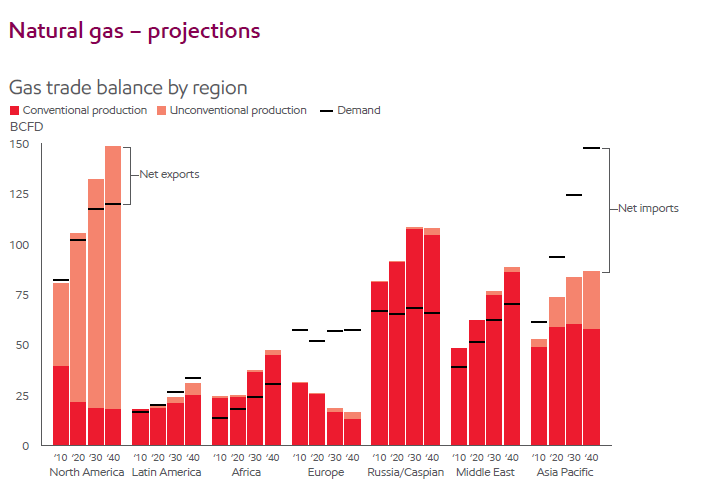 According to U.S Energy Information Administration (EIA, International Energy Outlook 2016 report), one other hopeful prediction for global natural gas demand is that consumption of natural gas worldwide is projected to increase from 120 trillion cubic feet (Tcf) in 2012 to 203 Tcf in 2040. Furthermore, EIA in the same report predicts that World LNG trade will increase significantly, from about 12 Tcf in 2012 to 29 Tcf in 2040. As far as South – East Asia (OECD Asia and NON-OECD Asia countries) gas future demand EIA in the  International Energy Outlook 2016 report predicts that will increase from 22,4 Tcf in 2012 to 63 Tcf in 2040.

South – East Asia LNG market has two categories, the first one is the mature LNG markets and the second one is recent and emerging Asia LNG Markets. Asia LNG mature markets include:

On the other hand, recent and emerging Asia LNG markets include:

According to EIA until 2019 Global Liquefaction capacity will increase by 30 percent. 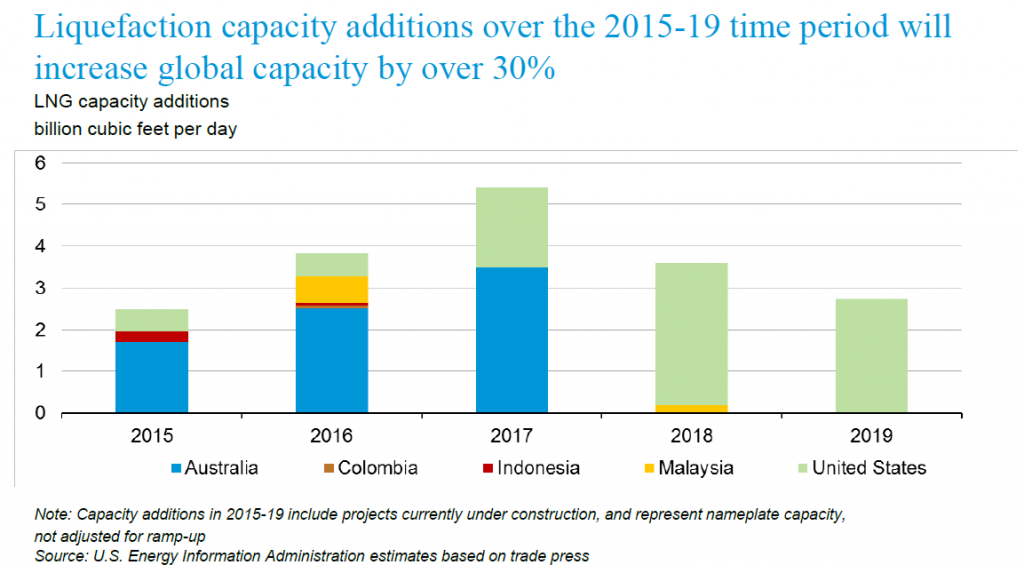 It is evident from the above inputs that future China natural gas demand faces many uncertainties, and accurate predictions cannot be made. 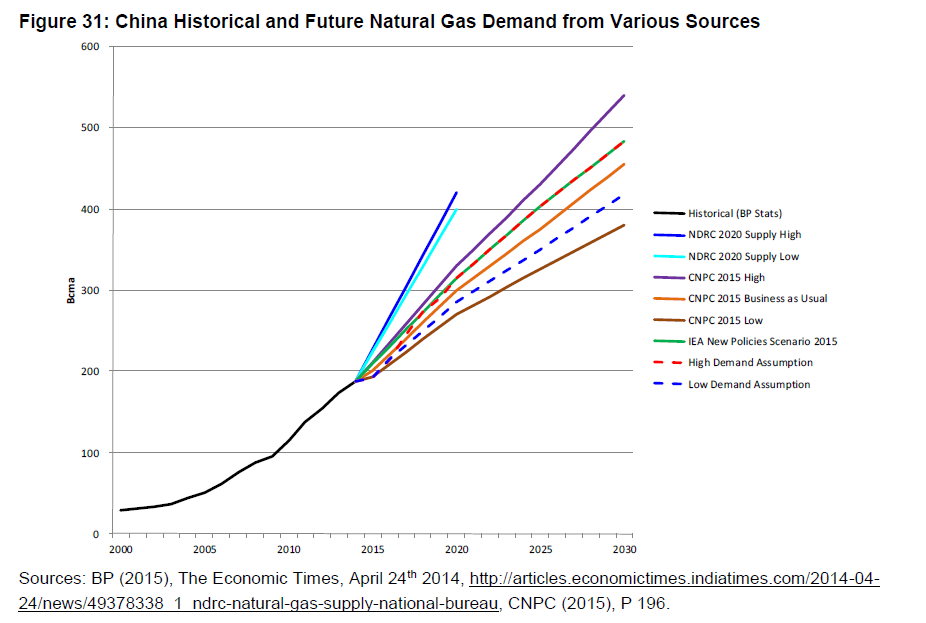 One other key element which will determine the future Chinese LNG imports is the future China natural gas production. A major percentage of this future gas production is estimated to produce from the China vast shale gas reserves. Despite the potential and the momentum the development of China shale/conventional gas reserves face many challenges. These key challenges as I have mentioned already in one of my previous articles are:

In conclusion, according to Howard V Rogers and its report “Asian LNG Demand: Key Drivers and Outlook” on Oxford Institute for Energy Studies the future China LNG imports has two possibly scenarios. (Observe the graphs below) 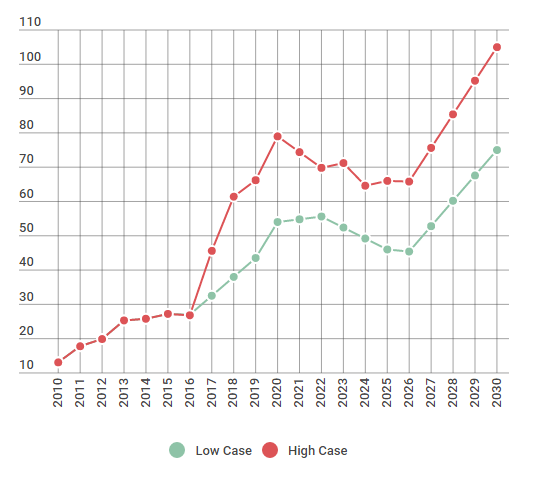 The main gas pipelines routes from which China import gas are: 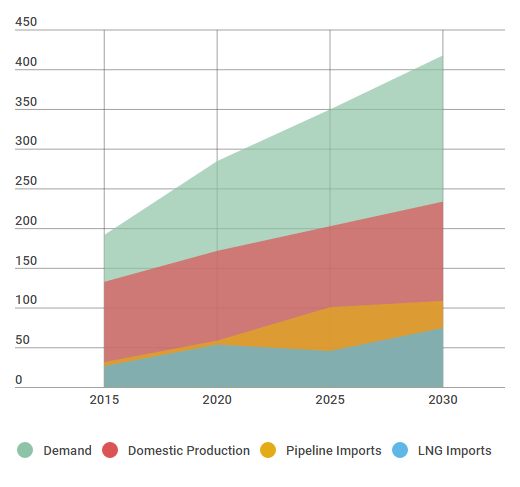 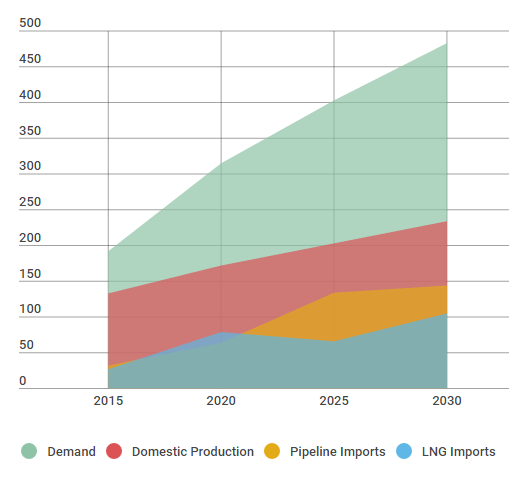 The main factors which will determine the Japan future LNG imports are:

Some of the key threats – challenges for the future India LNG imports are: 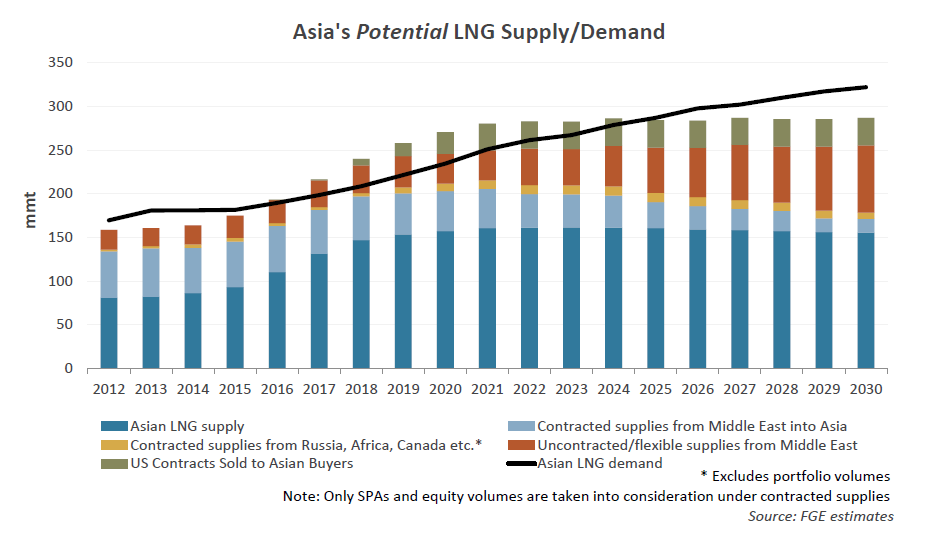 Based on the above graph it is evident that Asia LNG market is oversupplied and will be for the next 8-9 years, this means that LNG spot prices in Asia will remain flat for a long time. My personal estimation is that we can see Asia LNG spot prices between 4-6$ per MMBtu until 2022 at least. Furthermore, due to the future, an extended period of low LNG prices many projects for LNG exports terminals will not get an FID and exist plants which are under construction in a case of future small Asia LNG imports will face many economic challenges.

The primary outcomes from our analysis for the Global LNG Industry are:

Athanasios Pitatzis is an Industrial/Petroleum Engineer and Member of the Greek Energy Forum. He specializes in the development of oil & gas markets in Southeast Europe and the Mediterranean. Also, he is the owner of the website Energy Routes in which he publishes all of his articles for global oil and gas industry, http://energyroutes.eu/  The opinions expressed in the article are personal and do not reflect the views of the entire forum or the company that employs the author. Follow Greek Energy Forum on Twitter at @GrEnergyForum and Athanasios at @thanospitatzis.