This article was first published in the Spring Edition of International Petroleum Student Magazine YoungPetro, http://issuu.com/youngpetroart/docs/24.04-youngpetro-spring17-internet-/1?e=6136758/35254700 on Pages 23-27

Exxon Mobil predicts in their report (published for the year 2016) with tittle “The Outlook for Energy: A View to 2040” that:

It is obvious that LNG industry has a bright long – term future ahead but the next five years will be challenging.  Major LNG importers for the year 2014 according to the International Gas Union were Japan, South Korea, China, India, Taiwan and the UK. The same year the major LNG exporters were Qatar, Malaysia, Australia and Nigeria. Until 2020 many LNG export facilities will come online mainly in the USA and to Australia. East Asia LNG imports have declined by 3.9 percent in 2015 in comparison with 2014.  The main factors for this decline according to Cedigaz (the international association for natural gas) were unexpected low economic growth in that region, gas-fuel competitiveness and weather related factors. 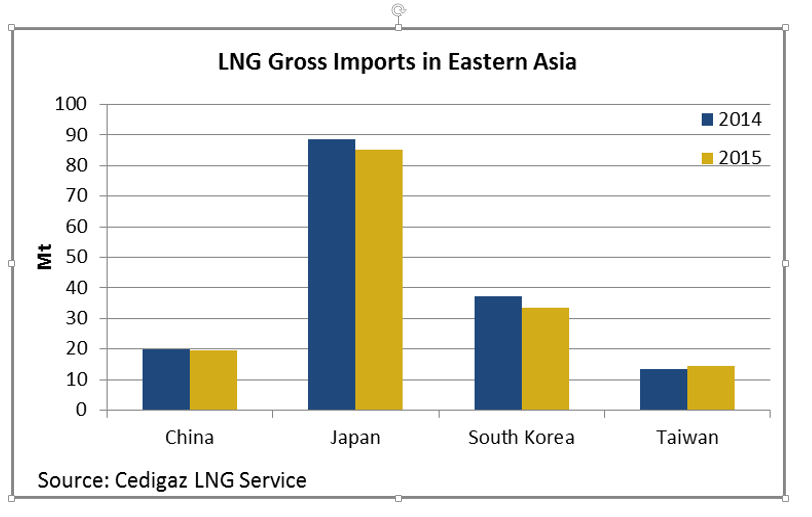 Moreover, LNG market is transforming to a global united commodity market with increasing liquidity and competitive market all over the world. These markets conditions will continue until 2020 or 2022. The decline in LNG prices is more than 50 percent in some cases in a period of only three years from 2013 to 2016. (Observe the pictures below) 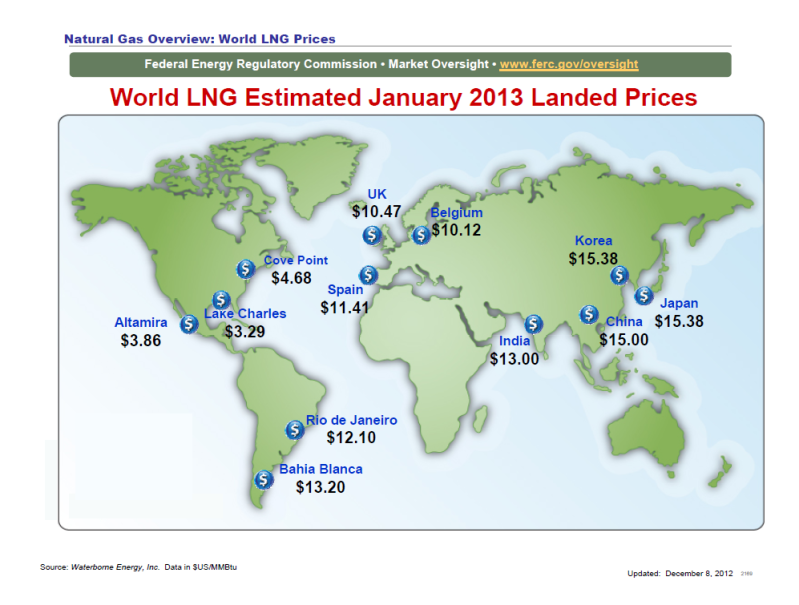 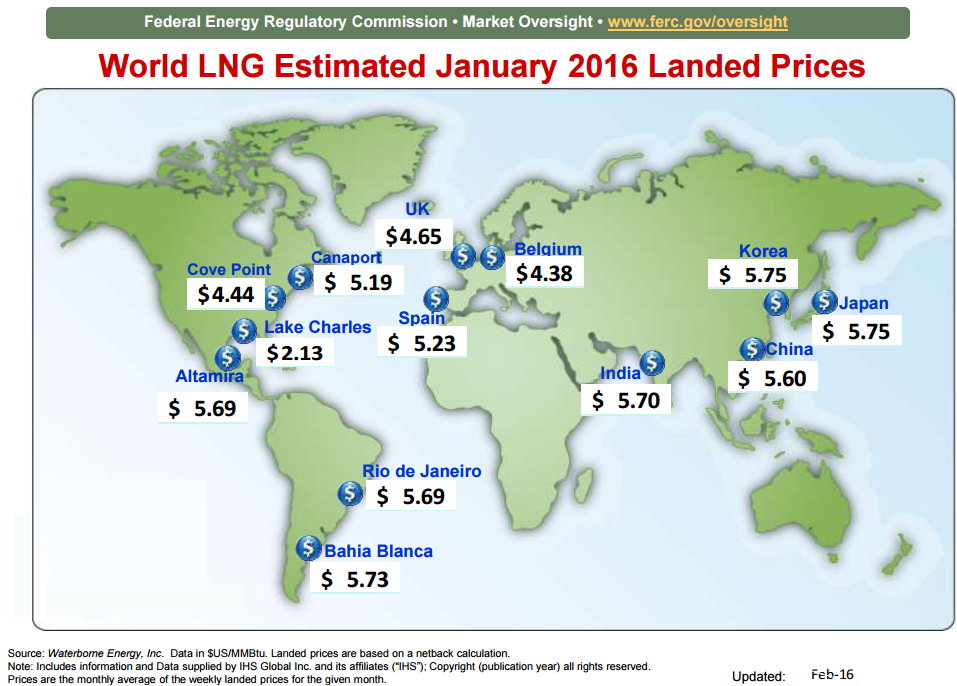 Differences in LNG prices from 2013 to 2016 per destination:

The prices  estimated to $US/MMBtu

It is obvious from the above information and LNG market trends that global LNG industry faces many uncertainties.

According to Energy Insights article with title “New LNG markets to carry future growth in demand” the future emerging LNG importers will be: 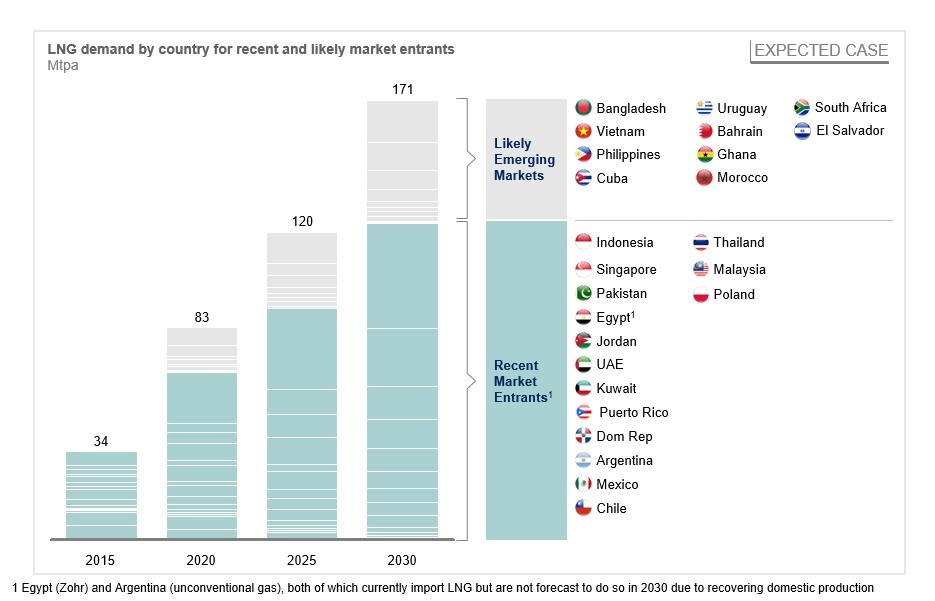 According to the above picture the recent LNG market entrants are Indonesia, Singapore, Pakistan, Egypt (after the Zohr discovery Egypt will be an importer of gas only for the upcoming 2-3 years), Jordan, UAE, Kuwait, Puerto Rico, Dom Rep, Argentina (due to high shale gas reserves the country gas domestic production will recover in the near future), Mexico, Chile, Thailand, Malaysia and Poland. Most of the recent entrants are utilizing floating LNG storage and regasification unit (FSRU). This option to import natural gas from countries which needed is quicker and cheaper than a land-based LNG import terminal.

The FSRU market is rising and is a new trend in global LNG market. The first FSRU was first deployed in North America, more particular in the U.S. Gulf of Mexico in 2005.Also, FSRU is a cost-effective solution for smaller or seasonal markets. FSRU are distributed around the world from South America to Europe and the Middle East. Finally, the future outlook for these vessels is promising due to emerging LNG importers like India and Philippines will use this option to import LNG shortly (2016 – 2017).

According to the IEA chart, the future LNG demand until 2020 will be generated mainly from Europe, China, India and Middle East.

The LNG glut according to many LNG experts like Cedigaz and IEA is more likely to last until 2022. According to the Gas Strategies during 2016 8 LNG import terminals are planning to start – up with a total capacity of 42.3 mtpa. Most of these terminals located in China (5), one in France, one in Ghana and one in Colombia. At the same time, according to the Gas Strategies 15 LNG exports projects are targeting to get FID (Final Investment decisions) during 2016. Most of these projects located in the US, Canada, and Mozambique.  The main factors which will determine the future global LNG outlook are:

[3] The outlook for LNG in 2016– supply growth but where is the demand?, Gas Strategies,http://www.gasstrategies.com/sites/default/files/download/outlook_for_2016_-_gas_strategies.pdf